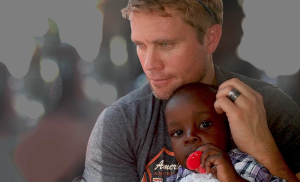 Time Ballard with a child rescued by O.U.R.

Today’s post is a little different. Forgive me for parting from the usual tax-incentives news but this is something very important. I hope you’ll see why.
I dare you to click on the picture of Tim Ballard and the little boy he rescued — listen to him tell the true story of what inspired him. Personally, I can’t listen to it without also being overcome by the strongest of emotions.
For some time, I’ve been following a young organization called Operation Underground Railroad.  Known as O.U.R. for short, this organization puts boots on the ground around the world, saving children from the misery of sexual slavery.
In the future, I will write more about O.U.R.’s people, their methods, and the success they are having.  Let me say for now, however, that these people are modern heroes. They are my heroes.

The organization’s founder, Tim Ballard, is also OUR’s Jump Team Commander for rescue operations.  He’s former CIA and Department of Homeland Security, where he was assigned to the Internet Crimes Against Children Task Force and an undercover operative for the U.S. Child Sex Tourism Jump Team.
A Modern Underground Railroad: The inspiration for the organization’s name comes from the American anti-slavery movement of the 19th century.  At that time, the historical Underground Railroad was a secret network of safe houses and friends that helped thousands of African American slaves escape from the south into the northern free states and into Canada.
The work Operations Underground Railroad does today is no less important.  Most people are unaware of how massive the illegal slave trade is today and of the misery its victims suffer. The most pitiful are defenseless children. O.U.R., and those who support it financially, are standing up to powerful predators and saving innocent lives.
My business provides employment tax-credit services for employers across the United States. The WOTC Planet is our blog. We’ve made a sponsorship commitment through December 31, 2016 to donate $1 to O.U.R. for each employee we process.  I’m looking for donation partners who would like to join us in supporting O.U.R.’s work. Please contact me if you’d like to find out more about this effort.
email Vaughn Hromiko